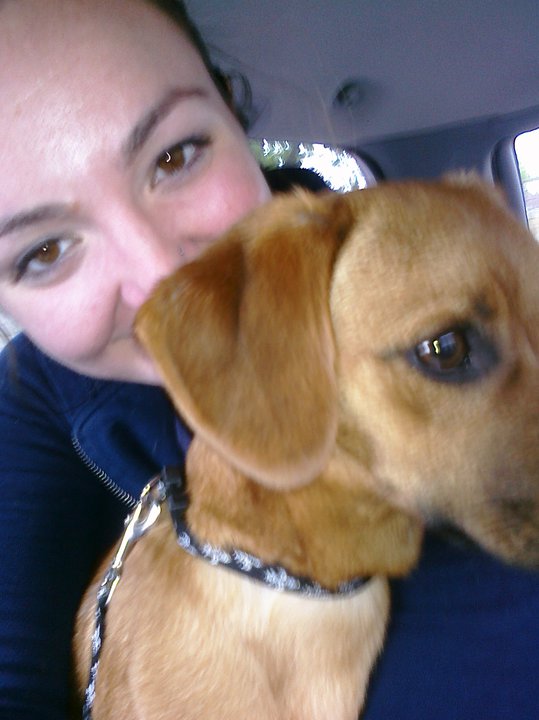 It was springtime 2010. I had been out of college for a couple of years and had just moved back home with my parents in Evanston after an awful apartment situation in Rogers Park (a neighborhood in Chicago just north of the city). (That’s a story for another day!)

While I had lived in the apartment, I had the opportunity to love on my roommate’s two cats, Kippy Doo-Dah and Kitten-Mitten Mr. Mustacheface. It was nice to have fuzzies to love because the dog I had grown up with, Essy, had passed away in 2005. Moving home meant no more Kippy Doo-Dah or Kitten-Mitten Mr. Mustacheface. It was so quiet at my parent’s house without a fuzzy!

I’d fallen in love with the idea of rescuing pets when I had my cat in college, Bella. The idea of adopting a pet whom someone else didn’t want, and showering it with love, affection and spoiling it to eternity was something that I really enjoyed. Friends of mine had adopted from a local no-kill rescue called Wright Way Rescue in a suburb of Chicago and had had a wonderful experience, so I took their recommendation, went online and filled out their application which was accepted very quickly.

Then I waited. I logged onto their website to look at their available pups and scrolled. I scrolled and scrolled, and examined, and memorized, and scrolled, and scrutinized each pup, every single day. I knew I wanted a Dachshund, but I wasn’t set on a purebred because mutts are just so much better in every way. It became part of my daily routine while balancing three jobs, to get on the WWR website, and scroll, and scroll and scroll.

Two dachshund mix siblings came available onto the website. A girl named Bonnie and a boy named Clyde. I took one look at Clyde’s picture, with his flat, sad ears, but what I could tell was a wiggly toosh, and called them up immediately. I made an appointment to see him that Saturday, May 15, 2010:

WWR: Ok, and which dog is it you’d like to meet?

WWR: Ah, sure. Would you be willing to adopt his sister, Bonnie, as well? WWR would like to keep the siblings together.

My inner monologue went a little like this: The money to adopt them both would be a bit much for me right now, and the thought of one new pup is daunting enough, without adding another troublemaking sibling to the mix! But I understand what they’re saying… I can’t just say no. So instead, I actually responded: Oh, umm, well, I’m not entirely sure that’s going to be possible, but let’s see what happens on Saturday when I get there. Is that ok?

We hung up and my heart felt like it had grown. It was beating so strongly in my chest, I thought I might burst!

The rest of that week went painstakingly slow, of course. I willed time to move and get me to my appointment on Saturday morning! The time finally came, and my parents and I drove out to meet this tiny pup.

We signed in, and they put me in a “Meeting Room” which was a cubicle in the center of their facility, where other people were in cubicles next door and behind me meeting their own animals. The air was abuzz with laughter, happiness, enthusiasm, and love.

They gave me some information about Clyde, and in this information, I discovered that he and his sister Bonnie had been left in a cardboard box, on the side of the road, in the rain in Southern Illinois. (What is wrong with people?!?!?) Wright Way Rescue had pulled them from a kill shelter there and transported them up to their facility at the outskirts of Chicago. They were both estimated to be around 2 years old exactly.

One of the volunteers brought Clyde out, who was a wiggly worm of anxiety and excitement (just like me, at the time) and set him in my cubicle. I was sitting cross-legged on the floor and I opened my arms to welcome him. He promptly climbed into my lap, licked the tip of my nose and rolled over so I could scratch his belly.

IN THAT MOMENT: I FELL IN LOVE.

This tiny pup would come home with me and be my partner in crime for as long as we both shall live. I sat in that cubicle and played with him for nearly an hour, and my parents took turns meeting him as well. They, too, fell in love.

I gave the volunteer the confirmation that this was now “My Dog” and asked her, “Can I meet his sister?”

She looked on her computer screen and turned to me saying, “Ah, it looks like she was adopted first thing this morning!”

IT WAS MEANT TO BE.

I renamed Clyde, Noodles in the car on the way home, because he was, and still is to this day, a Noodles.

For me, Noodles is my first child. He has been, and always will shine as my therapy dog, my confidant, my rock, my secret-keeper, my best friend, and my support. There was a line in my wedding vows to Martin that said, “I love that you’re secure knowing that you’re three-way tied for favorite men in my life, alongside Noodles and my Father.”

People laughed, because anyone who knows me, knows how true those words are.

Almost every single day while he and I snuggle, or walk the neighborhood, or have a tug of war, I wonder to myself, “Who’s luckier?” 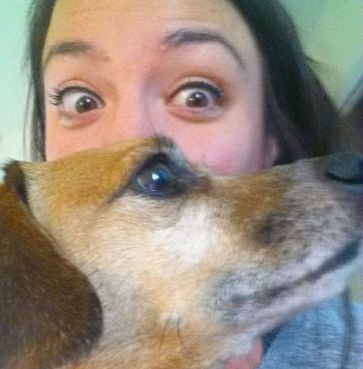 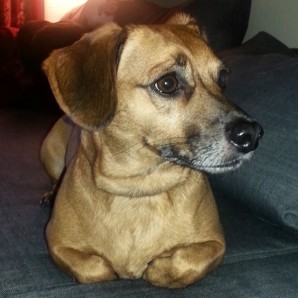 One thought on “Noodles”